Upgrading to .NET Core and .NET Standard Made Easy

In this post, I summarize the features of .NET Framework and .NET Core, explain why the 2.0 releases make it so much easier to upgrade than earlier releases, and give you processes, tips, and tools to simplify the upgrade.

.NET Core and .NET Framework are both platforms and frameworks. The platform part refers to the runtime and compiler, while the framework part refers to the code library. For a more detailed explanation, read my previous post that investigates whether .NET is a framework or a platform.

.NET Framework is the traditional full framework that you've been using for years. Microsoft released .NET Framework 1.0 in 2002!

It has these features:

If you started a new project in the last 12 months, particularly an ASP.NET Core project, you may be using .NET Core.

It has these features:

While you've probably heard of .NET Framework and .NET Core, these are not the only .NET platforms. There is also Mono, Xamarin.iOS, Xamarin.Mac, Xamarin.Android, and others; plus, there may be new platforms in the future.

.NET Standard 2.0 and .NET Core 2.0 add new APIs and a compatibility mode that make it much easier to upgrade.

Previously, the challenge with upgrading to .NET Core was that many existing .NET Framework projects were using APIs that simply did not exist in .NET Core. For example, SmtpClient in System.Net.Mail.

With .NET Standard 2.0 support, .NET Core 2.0 now supports many of these missing APIs. And for the APIs that are not supported, for example, System.Drawing, there are now good alternatives such as ImageSharp.

Approximately 70% of NuGet packages targeting .NET Framework can be targeted under compatibility mode. Previously, any projects or libraries that had dependencies of these packages could not be upgraded.

The first step is to upgrade to Visual Studio 2017.3. Once you've done that, you then need to download and install the .NET Core 2.0 SDK. Unfortunately, this SDK does not come preinstalled with the Visual Studio 2017 update.

At this point, you should be able to create new projects targeting .NET Core 2.0 and .NET Standard 2.0.

You might notice the framework version drop down at the top of the new project dialog box. This drop down only contains different versions of .NET Framework. Do not worry, ignore this drop down and select the desired project type. It will select the newest framework of the correct type.

You can confirm the correct type has been selected after creating your new project. Right click on the project in solution explorer, select properties, and go to the application tab. You will see that the correct framework is selected in target framework. If you want to target a different version, for example, an older version of .NET Standard for a library, you change that here.

Not all projects are candidates for an upgrade to .NET Core 2.0 or .NET Standard 2.0.

Console and ASP.NET Core projects are the easiest to upgrade and both make great candidates.

With ASP.NET Web Forms projects, a migration to .NET Core is going to involve a total rewrite in ASP.NET Core. Therefore, it is prudent to classify these as legacy projects at this point.

For projects built on Windows only and .NET Framework only technologies such as WCF, WWF, WPF, and Windows Forms, you'll need to stick with .NET Framework. These projects cannot be converted to .NET Core and should continue to target .NET Framework due to their dependencies.

For libraries, use their consumers as a guide.

If they're consumed by projects that you're upgrading to .NET Core, upgrade them to .NET Standard or .NET Core if absolutely necessary.

If they're consumed by multiple projects, some of which are being upgraded and others which are not, then upgrade them to .NET Standard; upgrading will enable you to reference these libraries from both the upgraded .NET Core projects and the non-upgraded .NET Framework projects.

If they're only consumed by non-upgradeable projects, optionally upgrade them to .NET Standard; this would be beneficial if you intend to use them in newer projects in the future.

Start by upgrading your libraries to .NET Standard. You'll be able to continue using them from all your current projects, whether they target .NET Core or .NET Framework.

The last step is to upgrade your projects to use .NET Core. If you're using APIs that are unsupported, you will need to migrate to an alternative. In some cases, this will be a different, newer API, which is already part of .NET Core. In other cases, you'll need to use an external library that adds the missing functionality.

If you're using libraries that don't support .NET Core, you'll either need to upgrade them, find replacements, or use them in compatibility mode.

To migrate your projects over to .NET Core 2.0 and .NET Standard 2.0, you have two options:

For the second option, there are two steps:

To work out if you can upgrade from .NET Framework to .NET Core and to find what you need to change, use the .NET Portability Analyzer extension for Visual Studio.

This is a fantastic tool that scans your projects and checks all the APIs being used against the configured framework targets. It can identify which APIs are being used that are incompatible with a given target and even suggests newer alternative APIs in some cases. In my experience, the suggestions are quite rare, so you'll be on your own in most cases. 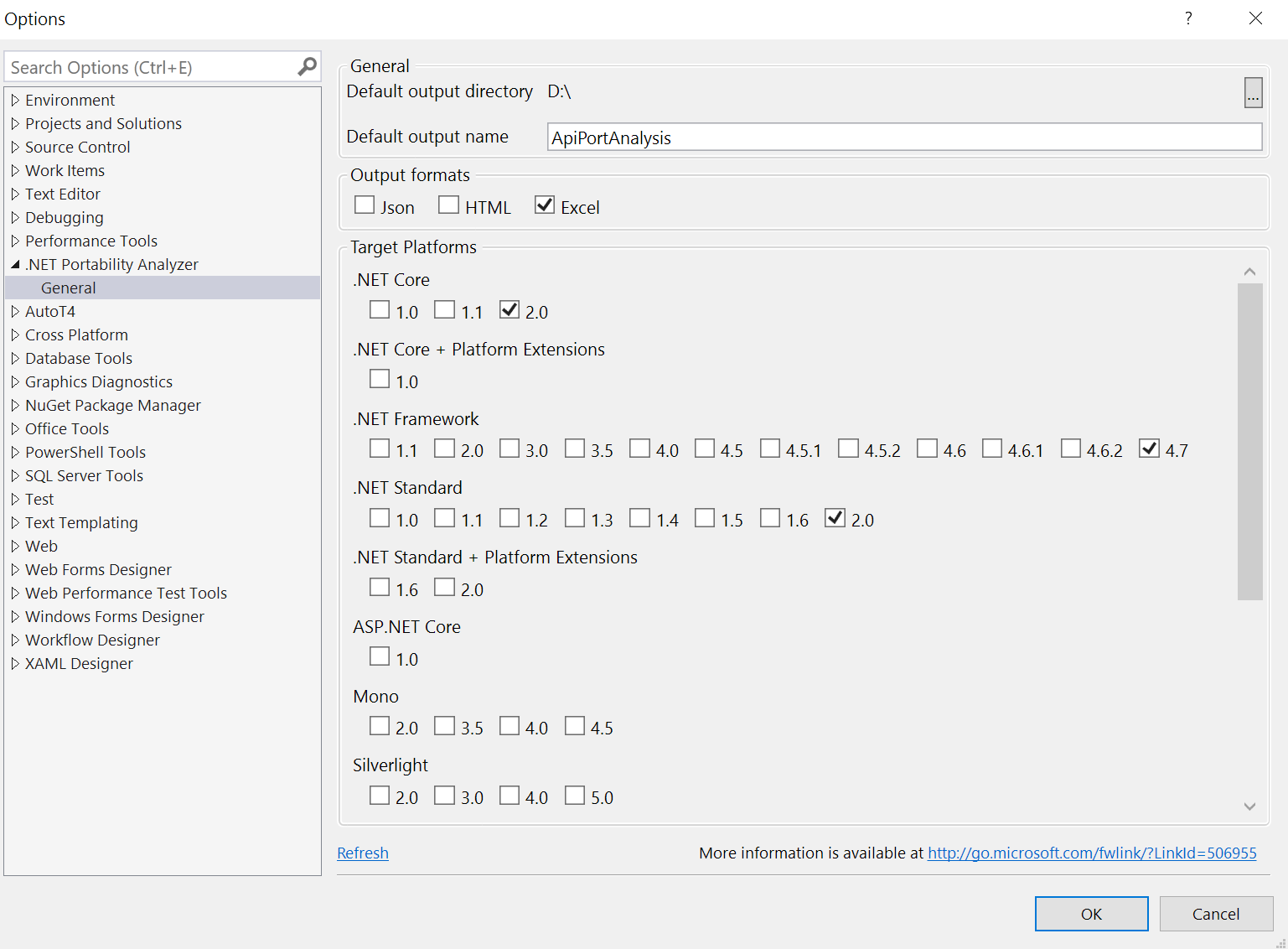 In the following report snippet, you can see that System.Web.HttpCachePolicyBase is only supported by .NET Framework. Whereas System.Configuration.ConfigurationManager is supported in .NET Core and .NET Framework, but not .NET Standard. The report also provides a suggestion as to how you might resolve the issue with ConfigurationManager in a .NET Standard project. In this case, the project is an ASP.NET MVC project; once it is migrated to ASP.NET Core, everything should be supported by .NET Core.

If you try to reference a .NET Standard package from an old-style csproj project, and it contains transitive dependencies, you might get a runtime error that looks like this:

Could not load file or assembly '[...]' or one of its dependencies. The system cannot find the file specified.

A transitive dependency is when your project depends on a package, that itself depends on another package. The problem manifests itself as not being able to find that final package.

Solution #1: Upgrade to a New-Style Project

For some .NET Framework projects, it is possible to upgrade to the new csproj format; you do this as described earlier in the migration section. However, this only works for ASP.NET Core, Console, and Class Library projects. For others, such as Xamarin, it doesn't currently work.

Hopefully, the new csproj format will be supported by more project types in the future. There is a User Voice suggestion where you can vote to add that support.

Solution #2: Switch from Packages.config to PackageReference

For projects that cannot be upgraded to the new csproj format, Scott Hanselman has the solution: you need to change the package management system by changing the RestoreProjectStyle property.

You change the RestoreProjectStyle property as follows:

Steps 1, 2, and 4 are completed by right clicking on the project in solution explorer. After step 3, the first <PropertyGroup> will look like this:

Have you run into an issue while upgrading to .NET Core or .NET Standard?

And if you've already solved it, please post that too along with your workaround or solution.

If your project is a good candidate for upgrading to .NET Core and you've delayed upgrading due to missing APIs, now is a good time to recheck. The APIs or a good alternative might be available.

To check for compatibility and to ease migration of existing projects and libraries, use the .NET Portability Analyzer extension for Visual Studio.

Post your upgrade issues and success stories in the comments below.

Understanding .NET Standard - An Interface Not An Implementation C# 7.1 - Everything You Need To Know