Understanding .NET Standard - An Interface Not An Implementation

With so many different platforms, standards, and frameworks, how do you make sense of it all? There is .NET Framework, .NET Core, and .NET Standard before you even get to Mono and Xamarin.

What is the difference, which do I need, what is .NET Standard? When do I use .NET Standard? If you're confused, then you're not alone and this post is for you.

In this post, I explain .NET Standard. You'll learn the purpose of .NET Standard, what it is, why it exists, when to use it, and how to use it. You'll also learn when to use platforms like .NET Core and .NET Framework.

What is .NET Standard?

The first thing you need to know about .NET Standard is that .NET Standard is not a framework or platform at all. It is fundamentally different from .NET Core, .NET Framework, Mono, and Xamarin. This confuses many people, so if you're confused about it, that's normal.

Here is a simple explanation by way of analogy:

Why does .NET Standard exist?

.NET Standard was created to unify all the different .NET platforms and solve problems with the old solution, Portable Class Libraries.

Previously, each platform implemented different APIs. This made it difficult to build cross-platform libraries, as there was no consistent set of APIs that you could use. If you needed to support a new platform, it might not implement some of the APIs you were using.

The old solution to this problem was Portable Class Libraries. The problem with those was that the APIs you could use were dependent on which platforms you targeted — you could only use the intersection of the platform APIs.

Another issue with PCLs was that you needed to recompile them with a different PCL profile to support new platforms. This meant that when a new platform was released, existing libraries could not be used until they were recompiled.

The goal of .NET Standard is to make it easier to create reusable libraries. Ideally, you should be able to write one library and have it work with .NET Framework, .NET Core, Mono, Xamarin, and any other platforms that may exist in the future.

.NET Standard achieves this goal by defining a common shared set of APIs that all platforms implement. In this way, you can target one specification, a particular version of .NET Standard, and have your code support any platform that implements that specification.

When do I use .NET Standard?

When building an application, you'll usually want to target the newest version, for example .NET Core 2.0. This gives you the largest API and the greatest compatibility with the libraries you might want to consume.

When you're building a library, you target a specific specification such as .NET Standard 2.0.

As the goal is to target the oldest version, .NET Standard versions never go out of date. Therefore, it is more proper to refer to them as specifications instead of versions. For example, .NET Core 2.0 implements the .NET Standard 2.0 specification.

You can also target your libraries at frameworks like .NET Framework 4.7. However, you should not do this, unless you really need some API that is only available in that framework. That is because frameworks are not the lowest common denominator, that's .NET Standard's role.

The only real reason to target a framework, is if you're building a framework specific library, for example, one that extends WPF. However, in many cases, you'll still be able to target .NET Standard and then simply take additional dependencies for any specific requirements, such as ASP.NET Core.

How do I use .NET Standard? 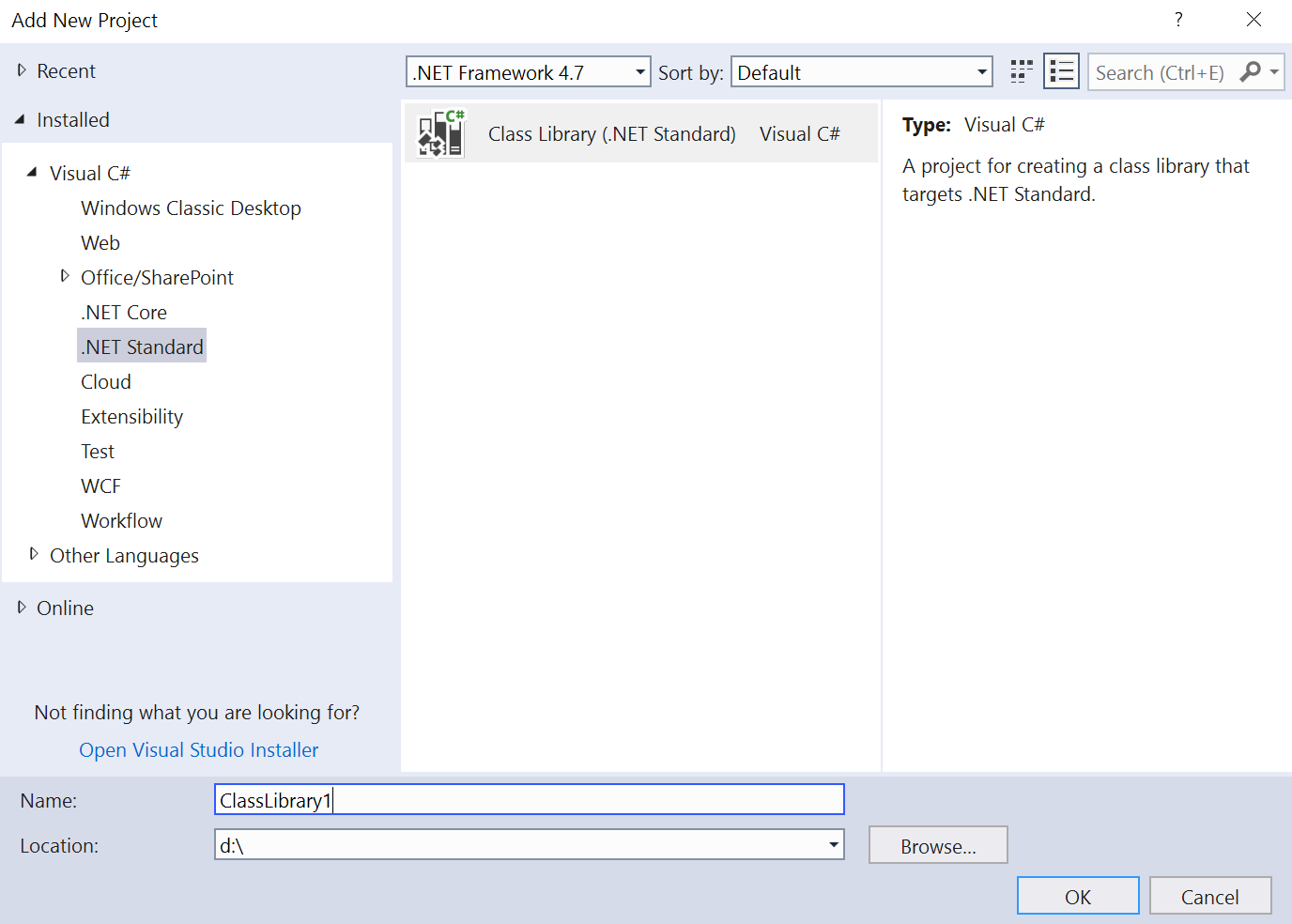 Then right click on the project in Solution Explorer and select Properties. Go to the Application tab and change the target framework to the .NET Standard version you want to target. 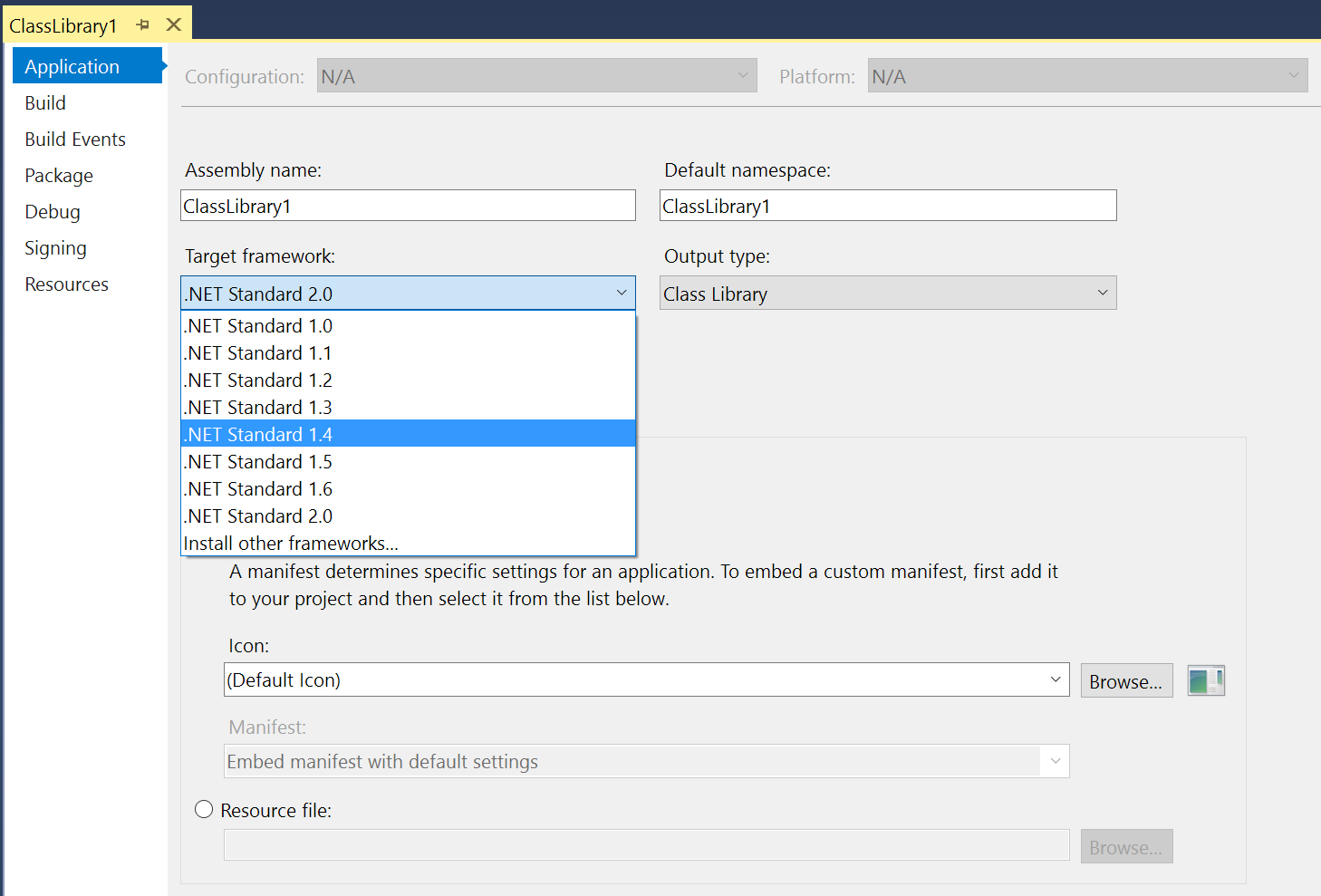 You have now created a new library targeting .NET Standard.

Instead, you need to download and install the .NET Core 2.0 SDK. After installing the SDK, you'll be able to target .NET Standard 2.0 and .NET Core 2.0.

.NET Standard is an interface, a set of APIs without implementations that a framework later implements.

.NET Standard unifies all the .NET platforms and solves the problems with the old Portable Class Libraries. .NET Standard 2.0 adds a compatibility mode that adds support for older, but compatible, .NET Framework libraries.

Your applications should target a platform such as .NET Core or .NET Framework. Your libraries should target the lowest .NET Standard specification possible, or much less often, a framework.

What is .NET? Framework or Platform? Upgrading to .NET Core and .NET Standard Made Easy